With legendary accomplishments, these famed equines have earned celebrity status!  Now is your chance to meet these exceptional horses!

You can visit these famous equines in the Celebrity Horse Aisle in the Pavilions at the 2020 Midwest Horse Fair!

King (APHA - King Crash Wimpy) is an 18-year-old American Paint Horse who has been trick riding for most of his life. Prior to becoming Kelsey Lauberth's (owner of the Trixie Chicks Trick Riders) personal horse and being chosen as the 2018 Breyer Horse Portrait Model, he worked at the famous Dixie Stampede dinner show in Pigeon Forge, TN for 7 years. Since his retirement from the Dixie Stampede, he has traveled around the country as one of Kelsey's main trick riding performance and clinic horses. He has helped many students from around the world learn to trick ride and helped them through their first performances. He is the horse of many trick riders and is truly a once-in-a-lifetime horse!

Although he only stands at 33.5 inches tall, GTR Patricks Vindicator is nothing short of a giant when it comes to his talent and personality. Patrick, as he is known to his friends and fans, is a 1994 American Miniature Horse gelding, owned, trained and shown by his friend of 21 years, Sarah Schaaf. Patrick and Sarah work tirelessly to promote the miniature horse breed by exhibiting at events across the state of Kentucky.

Patrick is best known for his incredible jumping abilities, having reached heights of up to 4 feet! Patrick’s work as an ambassador to the miniature horse breed, as well as his work as a registered therapy horse has earned him multiple awards including induction into the 2015 KVMA Animal Heros Hall of Fame, the 2017 USEF/EQUUS Foundation horse Stars Hall of Fame and in 2019 he was released as a Breyer Model Horse.

Patrick the Miniature Horse with his Breyer model

Truly Unsurpassed is affectionately known as “Calico” by her owner and partner, Nancy Conley, and is honest in the show ring and delivers every time. Calico has a gentle nature and allows Nancy’s grandchildren to ride her when she’s not out setting records in Western Dressage.  Nancy shares her love of Western Dressage by teaching lessons and conducting clinics at her farm, Balanced Riding Stables in Calhoun, Georgia. 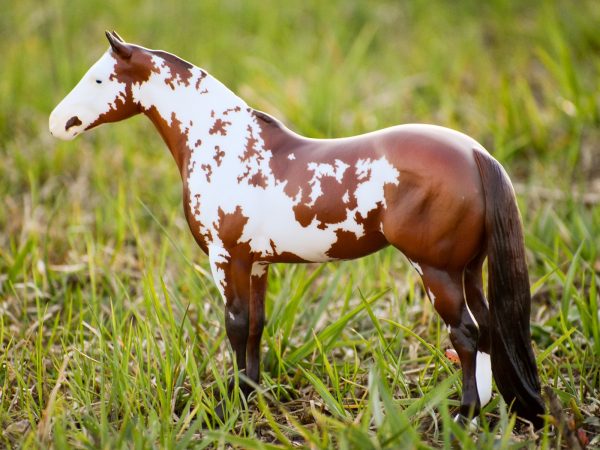 DC Wind Runner aka "Docaho" is a 2001 gelding registered with Ara-Appaloosa Foundation Breeders International.  Doc began his career in 2015 as a co-star on the YouTube channel, Dani the Horse Girl.  Together, Doc and Dani have earned over 19 million views and 57.7k subscribers!  The channel features Dani and Doc's many adventures and highlights Doc's easy-going, good-natured personality.  Doc and Dani have shown in every discipline available to them; Barrel Racing, Jumping, English and Western Pleasure, Trail Riding, and more!

Prior to his YouTube fame, Doc was a lesson horse who started many children under saddle.  Coincidentally, he was born on Dani's family farm.  He was sold as a weanling and began his life as a trail horse.  The stars aligned and he made his way to Brandi at Versatile Horsemanship.  After several years of owning Doc, Brandi came to the conclusion that he was ready for a little girl of his own.  Thus Doc made his way back to his birthplace and forever home with Dani on May 3rd, 2015.  You can continue to watch Doc's journey on their YouTube channel, Dani the Horse Girl!

Get your marshmallows ready for roasting, because BOTH the 2020 PRCA Rodeo nights are bound to bring some heat!

Join us Friday, April 17 at 7:30 p.m. in the Blain's Farm & Fleet Coliseum, to enjoy the Friday night PRCA Rodeo proudly sponsored by Nutrena.